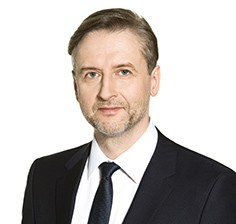 Marek Musioł is a legal advisor (radca prawny). He is a managing partner and founder (1994) of Musioł & Partners. He specializes in commercial law and strategic legal advisory services for businesses and individuals. He has expert experience in complex litigation and ADR.

In 1991-1994 he worked for a number of law firms in the US, in the London office of Clifford Chance (companies’ department), and in law firms in Poland.

He served as an arbitrator with the Court of Arbitration at the Polish Chamber of Commerce in Warsaw.

On numerous occasions, he has been listed and recommended in top international and Polish rankings of lawyers (Legal 500, International Legal Experts, Rzeczpospolita) with such areas of specialization as: company law, commercial law, insolvency, IP, labour law, M & A, and litigation.

“Marek Musiol is a qualified judge with vast international experience who has worked both in the US and the UK, who advises on a range of corporate and commercial matters, and who delivers professionalism and on-time feedback” –  Legal 500, EMEA editions: 2005, 2008, 2010, Legalease, London.

He is also qualified as tax advisor.

In his free time, Marek Musioł is a producer and performer of electronic music.

They were our legal adviser and representative for the last 6 years and were consistently reliable, professional and honest